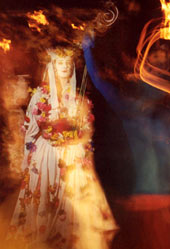 Every year on 30th April on Calton Hill in Edinburgh thousands of people come together for a huge celebration to mark the coming of summer. The evening begins with a procession to the top of the hill led by people dressed as the May Queen and the Green Man (ancient God and Goddess figures representing fertility and growth).

The May Queen crowns the Green Man, in a ritual similar to that carried out by Wiccan Pagans (who follow a structured set of rituals). The winter ends when the Green Man’s winter costume is taken from him and he is revealed in his spring costume. A wild dance takes place and the Green Man and the May Queen are married.

The main element of any Beltane celebration is fire. On Calton Hill torchbearers carry purifying flames and fire arches are used to represent the gateways between the earthly world and the spirit world.

Most of the imagery used in the costumes and rituals comes from the Celts and from Scottish folklore. Other influences come from indeginous people world wide. For instance, the symbol of Ogun, the Yoruba god of iron, can be seen on the faces of some of the performers, and the Geisha traditions of Japan are evident in the dress of the White Women (assistants of the May Queen). Due to the ecclectic nature of the celebrations, Edinburgh’s Beltane is not recognised as a religious ritual by many practising Pagans.