Heathenry is a term used to describe the religious practices of two main groups of people, one historical and one modern.

The original Heathens were the pre-Christian North European peoples who lived a thousand and more years ago in the lands around what is now called the North Sea. These included the peoples of Anglo-Saxon England, Scandinavia, Germany and Frisia (Friesland).

Modern Heathen groups around the world are reviving these old practices and call their religion by various names including Asatru, The Northern Tradition, Odinism, Forn Sed, Germanic Pagan Reconstructionism or, simply, Heathenry. In Iceland, which did not convert to Christianity until the 11th Century, Heathenry has once again become an official (nationally recognised) religion.

Heathens work to build healthy relationships with gods and goddesses, ancestors, spirits of the land, and others in their communities, both through holy rites and through their day to day actions. 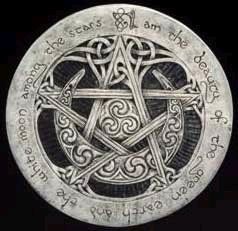 There are literary sources that tell us how Heathenry was practised before the advent of Christianity. The main such sources include medieval Icelandic Eddas and Sagas, Anglo-Saxon poetry, the works of the 8th century English monk Saint Bede, and the Germania by the Roman historian Tacitus.

Although most of these were written in Christian times, they record the religious beliefs and practices of a culture that existed before Christianity came to Northern Europe. Archaeological evidence continues to be discovered which supports this picture of Heathen religion obtained from such classical and medieval literature.

Alongside these historical sources, modern Heathens experience their own, personal, understanding of their religion as lived today, and their own relationship with their gods.

Gods and other beings

Heathenry, like all ancient European pagan religions, is polytheistic and recognises a large number of gods and other spiritual entities. Although the Heathen gods are best known from Norse Mythology (and often called by Anglicised versions of their Old Norse names) they were honoured by many peoples outside of Scandinavia. For example, the god known to early Germanic tribes as Wodhanaz became Odhinn in Old Norse, Woden in Anglo-Saxon and Old Saxon, and Wuotan in Old High German. Some of the most well known Heathen gods are enshrined in our English days of the week. Tuesday is named after Tiw (Tyr), Wednesday after Woden (Odin), Thursday after Thunor (Thor) and Friday after the goddess Frige (Frigg).

In addition to the better known ‘major gods’, the names of several dozen local or tribal gods are known through medieval literature, runic inscriptions, and votive stones. Most Heathens choose to actively honour a subset of gods with whom they have developed personal relationships, although offerings are also often made ‘to all the gods and goddesses’. Heathens relate to their gods as complex personalities who each have many different attributes and talents. For example, whereas Thor is popularly known outside Heathen circles as the mighty hammer-wielding God of Thunder, in Eddic poetry he is called by names such as Deep Thinker, Man’s Well-Wisher, and Consecrator Thor, revealing a gentler side to his nature.

In addition to gods, Heathens recognise and relate to a wide variety of spiritual beings or ‘wights’. These include the Norns – who are three female entities who weave the web of wyrd – and the Disir – who are female ancestral spirits attached to a tribe, family, or individual. Heathens also work with ‘hidden folk’ such as elves, brownies, dwarves and etins (giants and other not so pleasant folk). They interact with the housewights who live in their homes and the landwights who occupy features of the landscape such as streams, mountains, forests or fields. Having a relationship with landwights is an important feature of Heathen religion and outdoor Heathen rituals will not proceed until the permission of landwights is sought and obtained.

Another characteristic of Heathen religion is the respect given to ancestors in general. These may be a person’s literal forebears, or may be people now dead who have inspired them in some way.

The Norse gods in history

Carolyne Larrington, Tutor in Medieval English at St John’s College, Oxford; Heather O’Donoghue, Vigfusson Rausing, Reader in Ancient Icelandic Literature in the Department of English at Oxford University and John Hines, Professor of Archaeology at Cardiff University discuss the role of theology and the gods in the Vikings’ daily lives.

There are no central authorities in Heathenry and no single organisation to which all Heathens belong, though there are national and international organisations created to facilitate networking between Heathens. There is no widely recognised priesthood, although sometimes individuals may be recognised as godhis and gydhjas (priests and priestesses) within their own communities.

Many Heathens belong to small groups made up of Heathen friends and family members. These groups are sometimes called ‘hearths’ or ‘kindreds’ and meet for religious rituals in members’ homes or in outdoor spaces. Some hearths and kindreds have recognised leaders. Others are entirely egalitarian.