The main rites celebrated in Heathenry are called blot (pronounced ‘bloat’) and symbel (pronounced ‘sumble’). Heathen groups and individuals hold feasts and celebrations based around blot and symbel at rites of passage (such as weddings or baby-namings), seasonal holidays, oath-takings, rites in honour of a particular god or gods, and rites of need (in which gods are asked for help).

A blot was originally the ritual sacrifice of an animal to one or more gods, elves or ancestors. A feast followed afterwards at which the meat was shared amongst the participants. Blots were held to honour the gods or to gain their favour for specific purposes such as peace, victory, or good sailing weather.

A modern blot centres around the offering of food or drink (often mead) to the gods and tends to be followed by a feast. It may be a simple rite or a more elaborate one depending on the purpose of the blot and the number of participants. In an indoor blot where food is offered, it is common to lay a place for the god, ancestor or elf at the table. In an outdoor blot offerings are often thrown onto a fire. 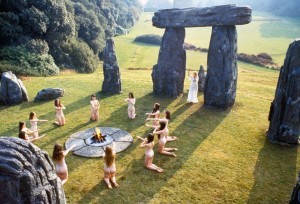 Symbel is a ritual drinking ceremony in which one or more drinking horns or other vessels are filled with mead (or another appropriate drink) and used for toasting or boasting. It is common for modern Heathens to pass the horn(s) around all those participating after liquid is blessed. The first round of toasts may be to the gods, the second round to wights or ancestors, and the third round may be to whatever else the assembled Heathens wish to toast. There may be many more rounds, or the symbel may stop after a designated number. A separate libation (drink offering) may be given to the gods, landwights or housewights, or some of the contents of the horn may be poured out as an offering to them.

As well as major offerings to the gods or elves, Heathens like to leave gifts for their domestic hidden folk: the wights who live in their garden and house. For this purpose, many Heathens keep a special bowl to leave offerings in the house of cakes and ale, or may leave food or drink on or near a small garden altar.

Different Heathen communities and individuals celebrate different cycles of seasonal holidays based on their cultural affiliations, local traditions, and relationships with particular gods. There is no fixed calendar of Heathen festival dates. The three Heathen festivals most commonly celebrated in the UK are Winter Nights – usually celebrated in October or November, Yule – a twelve day festival that begins around the time of the winter solstice, and a festival for the Anglo-Saxon goddess Eostre in the spring.

Magic and seership were practised by some individuals within ancient Heathen cultures, and this is also the case with today’s Heathen community.

Some Northern European magical practices being revived by Heathens include the carving of runes onto talismans and the chanting of charms called galdor. Some Heathens are also rediscovering Northern European shamanistic practices known as seidh (pronounced ‘sayth’). In a ritual called ‘oracular seidh’ a seer or seeress answers questions or gives advice to participants. Many modern Heathens also practice runic divination.

Although magic was part of ancient Heathen culture, it did not play a part in the religious rituals of blot and symbel. Therefore, it is not seen as an intrinsic part of the religion. Although all Heathens share a belief in the ability of the gods to enact change in the world, they do not all believe in the ability of magicians to do so.