The whole of reality, God, gods, spiritual beings, energy, matter, planets, galaxies, trees, animals, rocks – and us, are all part of the One interconnected Ultimate Reality. This One Reality expresses itself in a whole gamut of manifestations; therefore people can talk of having God within them, or the Earth being divine. For some, therefore, green issues take a religious dimension. People worship creation.

Through using various techniques, or rituals, people claim to receive direct power and insight, and even an altered state of consciousness. It is often held that direct knowledge, or illumination, can be experienced through an encounter with some spiritual being or the Ultimate Reality of the universe. 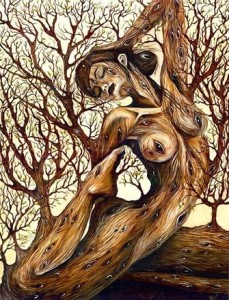 A plethora of spiritual beings

Most, but not all, forms of paganism believe in the reality of supernatural beings, whether it is gods, demons, angels, spirits, ghosts, or whatever. It is held that they can be contacted, and for a price, wisdom and power can be imparted.

A wide range of contemporary pagans believe in some form of life after death, either by re-entry into this world, or by becoming a spiritual being in another dimension. Others hold that we become absorbed into the Ultimate Reality, perhaps losing our personal conscious existence.

As everything is simply a form of the One, the Ultimate Reality, all religions are seen as essentially various manifestations of the same human endeavour. Gradually, all will coalesce into One.

Many pagans hold a grim parody of the biblical world-view. They feel that in the distant past humans once had a far greater spiritual and powerful existence, which we lost, and that we are now heading for a new higher consciousness and existence again, the New Age, the Age of Aquarius. In this exalted state, all religions and governments will be subsumed into one global empire.