A millennium after the Viking Age, the Norse gods are making a comeback in our popular culture — and casting new light on some very old verbiage. The new movie “Thor: Ragnarok” takes its name from the thunder god and the Norse word for doomsday. Thor’s father Odin — the ruler of Asgard, the Scandinavian version of the ancient Greeks’ Mount Olympus — plays a big part of two TV series (“Vikings” and “American Gods”). Thor and company also appear in fantasy novels such as Rick Riordan’s Magnus Chase series and a recent retelling of the original myths by Neil Gaiman in the book “Norse Mythology.”

The resurgence of Norse paganism : ” something about our times makes people crave tales of valor “

As they plied the cold northern waters during the Middle Ages, Scandinavian seafarers passed down a rich oral tradition about mythical beings inhabiting nine interlocking spiritual worlds. These myths — later written down in 13th-century Iceland — left conspicuous traces in English. Tuesday, Wednesday, Thursday, and Friday are named for Asgardian gods Tyr, Odin, Thor, and Frig, respectively. “Ragnarok,” often translated as “twilight of the gods” or “death of the powers,” refers to the end of the nine Norse worlds, culminating in a cataclysmic battle. The term has been found in English since the 1600s and is often used figuratively, much like “Armageddon.” A use in A.H. Yapp’s 1899 book “Cuckoo” signified bad news for bird-lovers: “The ragnarok of the cuckoos — the last band of the migrating males.”

Other terms with wider use are “Valhalla” (the Asgardian hall for slain warriors) and the “Valkyries” (Odin’s handmaidens who pick which warriors get to enter Valhalla). The Valkyries gained fame via the music of Wagner; today the term is used as a symbol of female power by many sports teams and organizations, such as the Minnesota Valkyries Rugby Club and Saskatoon Valkyries of the the Western Women’s Canadian Football League. Many people reference Valhalla when praising fallen soldiers today. Daily Beast reporter James LaPorta invoked Odin’s great hall in a tweet mourning David Johnson, who died in the recent ISIS attack on Niger: “Rest easy Sgt. La David Johnson. Til Valhalla.”

Part of why the Norse myths continue to compel so many readers, writers, and artists is their sheer entertainment value, featuring high adventure, low comedy, apocalyptic nightmares, and ample drinking. Karl E. H. Seigfried, adjunct professor and pagan chaplain at Illinois Institute of Technology and author of the Norse Mythology Blog, said by e-mail that the Norse myths resonate on three levels: dramatically, emotionally, and spiritually. Of the three, the spiritual element is often overlooked.

Underneath the troll-smiting mayhem, the Norse myths have an uplifting core, insists Seigfried, who is also a priest of Thor’s Oak Kindred in Chicago. “In contrast to the gloomy Nordic worldview often portrayed in popular culture,” he said, “the wandering god [Odin] never stops searching for knowledge and never ceases to rage against the dying of the light. The old gods may die at Ragnarök, but the myth is life-affirming. We will not live forever, but our children will survive us, and their children will survive them.” 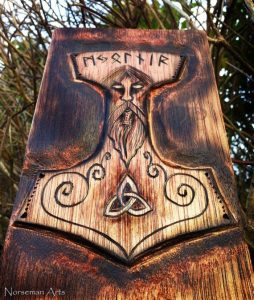 That optimism attracts people like Seigfried, who views the myths as they were originally intended: as a form of religion. He’s part of a modern version of the old Norse religion that was founded in Iceland in 1972 called Ásatrú. Perhaps turned off by the dominance of monotheistic religions, some spiritual seekers come to Ásatrú looking for guidance and inspiration.