Wheel of the Year

The Pagan seasonal cycle is often called the Wheel of the Year. Almost all Pagans celebrate a cycle of eight festivals, which are spaced every six or seven weeks through the year and divide the wheel into eight segments. 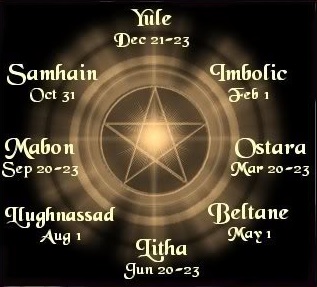 Four of the festivals have Celtic origins and are known by their Celtic names, Imbolc, Beltane, Lughnasadh and Samhain.

The other four are points in the solar calendar. These are Spring and Autumn Equinox (when the length of the day is exactly equal to the night), Summer and Winter Solstice (longest and shortest days of the year). Neolithic sites such as Stonehenge act as gigantic solar calendars which marked the solstices and equinoxes and show that solar festivals have been significant dates for hundreds of thousands of years.

(The seasonal differences between the hemispheres mean solar festivals are celebrated opposite different dates in the southern hemisphere.)