In late December 999 AD Brian Bóruma, king of Munster, decisively defeated the Vikings of Dublin at the battle of Glen Máma. This bloody contest was a severe set-back for the Hiberno-Norse inhabitants of the city, and their king, Sitric Silkbeard, was forced to flee. The following day Brian’s troops marched on Dublin, which they entered uncontested, plundering and burning as they went. However, somewhat unusually, Brian diverted a section of his forces to a forest close to the city. Here they proceeded to cut and burn the trees of Caill Tomair, in an act that was deemed worthy of being recorded in the Irish Annals[iii].

The etymology of Caill Tomair may give an insight into why Brian carried out this unusual manoeuvre. It appears to be made up of the Irish word for a forest/wood (coill) and an Irish rendering of the divine name Thor (Þorr), literally Thor’s Wood. If this interpretation is correct then it suggests that the site was probably a sacred grove where the pagan inhabitants of Dublin worshipped Thor . If this was the case then its destruction was an act imbued with both religious and political symbolism and a very clear assertion of Brian Boruma’s dominance over the newly captured city.

Sacred groves played an important part in Norse pagan religious practice and were normally referred to as lundr in Old Norse. These sites appear to have been relatively common and were often incorporated in later Scandinavian place-names. For example Þors lundr (Thor’s Grove) is a common place-name in Denmark.

The most famous surviving description of a sacred grove comes from an 11th century account by Adam of Bremen, which details the temple site at Gamla Uppsala in Sweden. In it he states that ‘near the temple is a sacred grove which each and every tree is sacred and in which the human and animal victims are hanged’. This appears to describe the Norse pagan practise of blot , which involved sacrificing animals and sometimes humans, to appease the gods. This ritual was often associated with sacred groves and it is possible that it was also carried out at Caill Tomair in Dublin.

The dedication of the Dublin grove to Thor is not surprising as this deity was one of the most popular Nordic gods. Associated primarily with thunder and fertility, his adherents often wore miniature Thor’s hammers in attempt to invoke his favour. A number of these small hammers are known from Viking Age Dublin and it appears that the city’s residents may have had a special affinity with the thunder god. This is suggested by a number of early Irish texts, which refer to Dublin’s inhabitants as ‘Muintir Tomar’, which probably translates as ‘Thor’s people’.

Furthermore, one of the city’s main pieces of regalia during the 10th century was an object known as ‘Fail Tomar’ or ‘Thor’s Ring’. This item, which was captured by Máel Sechnaill mac Domnaill, king of Mide, in 995 AD, may have been a heathen cult object similar to the Thor’s ring described in the Kjalnesinga Saga. This Icelandic text describes a large ring, which was located within a temple dedicated to Thor. ‘On the altar was to lie a great armband, made of silver. The temple priest was to wear it on his arm at all gatherings, and everyone was to swear oaths on it whenever a suit was brought’. The use of this Thor’s ring in oath-swearing ceremonies mirrors contemporary Irish society where saint’s relics were often used for pledging oaths and making legal treaties.

Thor’s hold on Dublin was soon to wane, however, and in the early 11th century the city officially became a Christian one. In 1028 its king, Sitric Silkbeard, formally established the diocese of Dublin and Dúnán was ordained the city’s first bishop. Construction also commenced on Christchurch Cathedral and this soon became the focal point of religious practice within the city walls. The citizens of Dublin, it seems, were no longer the people of Thor.

It’s been 1,000 years since Iceland was a pagan country, since Odin, Thor and the gods of Norse mythology claimed the country for their own. After Iceland adopted Christianity as its national religion in 1000 AD, it never looked back. Until now.

To most people, Paganism seems like an extremely outdated religion. To the heathens of Iceland however, 2,500 Pagans stand strong as the second largest religious group in the country. They’re now planning to build northern Europe’s first Pagan temple in over ten centuries.

Many people find it odd that Iceland is bringing back a religion whose gods, like Thor, have been turned into Marvel Comic superheroes. But the Asatru Association, an Icelandic neopagan religion, have always fully embraced the coming together of folklore and religion. One of the Asatru’s high priests explained that they see myth as a metaphor for human psychology and the forces of nature. 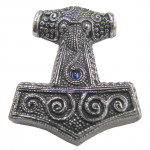 The main agenda of the Asatru Association is to regain some of Iceland’s lost heritage. This makes sense considering Iceland has never fully embraced Christianity. A thousand years ago, it made sense for Iceland to take up Christian traditions since they had to trade with the rest of predominantly Christian Europe. They had to keep up appearances for economic reasons. Although the majority of the country is Lutheran today, Iceland also has one of the highest rates of atheism in the world.

The new Pagan temple will represent the religion’s devotion to nature. It will be built atop a hillside that overlooks the city of Reykjavik, with a large dome that will let the sunlight decorate the temple walls. They will worship their gods like Thor and Odin, and observe the ancient ritual of the Blot feast, but without the traditional animal sacrifice that usually accompanies it.

That’s the interesting thing about Paganism. Pagans have no issue ditching unethical practices from the past, unlike many other religions today. They’re able to maintain a connection to their history while also being flexible about changing tradition to suit a modern worldview.