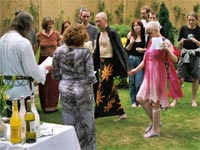 Pagan wedding ceremonies are called handfastings and mark the coming together of two people in a formal, loving and equal sexual partnership.

Pagans take the swearing of oaths very seriously indeed and believe it important that they articulate the sincere, considered intentions of the individuals concerned rather than merely repeating a standard formula.

Accordingly, the vows a couple will swear to each other before their Gods and Goddesses during a handfasting will be carefully discussed and decided upon by them beforehand, in consultation with the Priestess and/or Priest who will officiate at the ceremony.

While all couples will vow to love, honour, respect and protect both each other and their children, the responsibility for the form of the committed relationship they are undertaking ultimately lies with them.

A couple may choose to handfast for the traditional period of a year and a day, and it is not uncommon for Pagans in long-term relationships to renew their vows after each year and a day has passed so that neither comes to take the other for granted. Others vow to handfast for life while a few, in accordance with Pagan beliefs in reincarnation, do so for all their future lives as well.

Druids officiate at a Pagan wedding

As with all other Pagan ceremonies, there is considerable variation in the precise form an individual handfasting rite will take, but some parts are all but universal.

The ceremony will be held out of doors if at all possible, and will begin with the marking out of sacred space (usually in the form of a circle), the honouring of the Four Elements, and a welcome for all who are present.

The Gods and Goddesses will be called upon to bless the future life of the couple. The couples’ right hands will be bound together (hence ‘handfasting’), they will swear the oaths that will henceforth define their relationship, and their hands will then be unbound in token that they remain together of their own free will.

Rings will be exchanged and the ceremony will conclude with ‘jumping the broomstick’ – the couple leaping hand in hand over a broom held horizontally before them, thus crossing the symbolic boundary between their old lives and their new, shared, one. As with most Pagan rituals, a handfasting will be followed by feasting and celebration by the company.